The cross and the yellow and blue: Parma Calcio's two souls beating in the heart of the city and coming alive through the new home and away kits for the 2021-2022 season 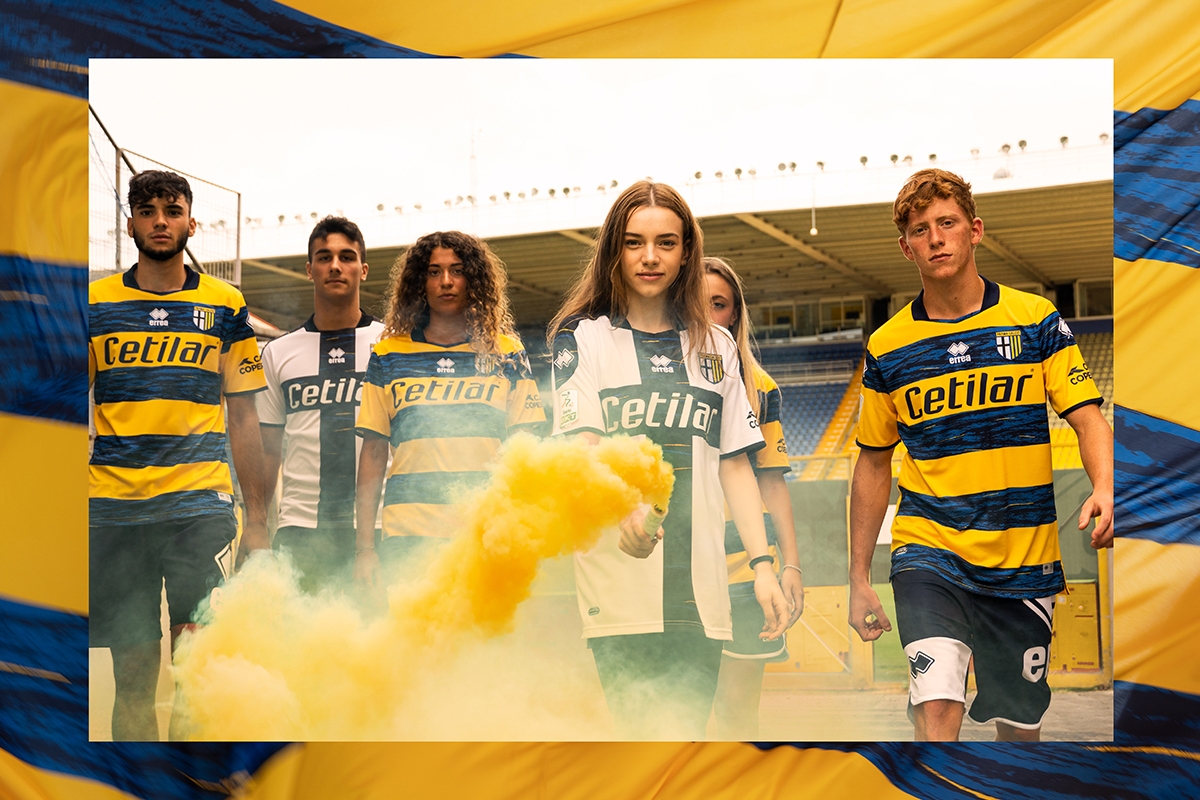 Two different souls and yet twins that come together to form a single identity. That of Parma Calcio 1913, which today unveils the new match kits created by Erreà Sport for the forthcoming 2021-2022 season.

The communication campaign, devised by Erreà and shared with Parma Calcio, exalts the strong ties with the city represented in its most loved and characteristic places, and presents the two shirts through two perspectives which are absolutely complementary. The first flies high above the city, alternating with a second view, which enters into the heart and centre of Parma to form a single look, that symbolically embraces both. The result is the image of two original souls that are not only to be “worn” but above all experienced and felt deeply, as emphasised by the launch hashtag #feelparma.

Featured are a group of young people who look to the future. It is a portrait, with a fresh natural flavour, of generations linked to the past but with the desire to innovate and never stop.

What is apparent on both kits is the continuity with regard to tradition, renewed by some original features.

The home shirt has a new design that for the first time, illuminates and brings colour to the classic black cross, which is no longer a single, monotone colour, but is made up of yellow and royal blue streaks which bring together the Club's two historical colours. Another new element is the same pattern on the cross appearing along the shoulders, thanks to an elegant insert that is printed and sewn onto the shirt. There is a refined ribbed collar, designed in a unique V shape, embraced by two overlapping fabric inserts. The back of the shirt is a confirmation of the well known symbol of the phoenix embroidered below the collar, and of the presence of side slits. Again, the length is greater, compared to the front, to enhance the line.

The same model is used for the away shirt which marks the return of the iconic and timeless design with broad horizontal stripes. These are on a yellow background and they offer the same pattern as the first shirt. The blue is, in fact, not a solid colour, but also has light blue and yellow streaks created using sublimation printing. Unlike the first shirt, the shoulders are totally yellow with no inserts.

A great deal of care and attention, as always, has gone into the details that make the style and constant research the most significant characteristics of the shirt that are rendered even more high-performance by a driven technological innovation associated with the fabric.

Following its first ever appearance last season, the shirts have now also been produced for next season in  Ti-energy 3.0, an antiviral and antibacterial technical fabricdeveloped by Erreà’s Research and Development Department. Tests performed in accordance with ISO 18184 using the SARS-COV-2 virus, have proved that in the laboratory, the Ti-energy® 3.0 fabric can reduce the viral load by 99.85% compared to a standard polyester fabric six hours after coming into contact with the virus.

This unique success in the world of fabrics became possible through the use of two separate technologies: zinc oxide nano particles, permanently encapsulated in the fibres and the Minusnine J1+ treatment. This dual function allows the fabric to form an effective protective barrier against droplets, liquids and micro-organismsand ensure that players on the pitch have even greater safety and protection.