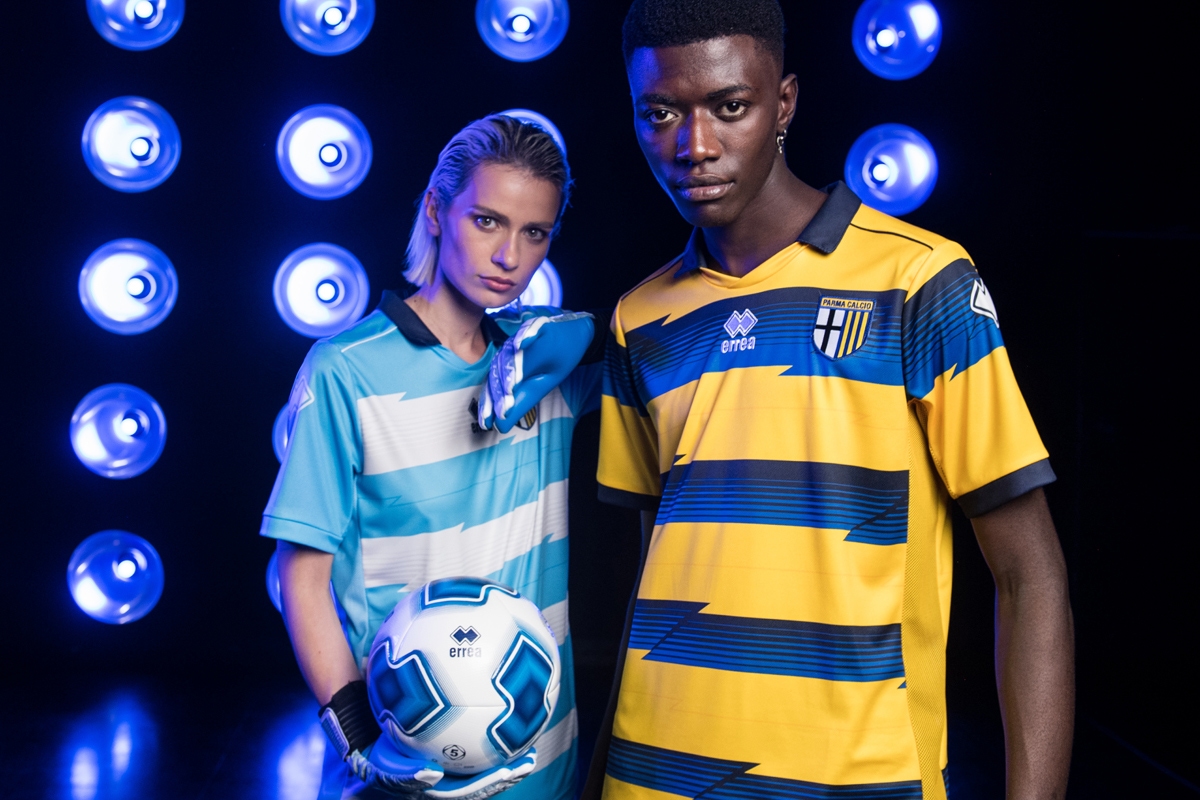 Erreà Sport and Parma Calcio 1913 unveil the new away kit the Parma team will be wearing during the 2022 – 2023 season. The away kit once again features the iconic, timeless pattern with broad horizontal stripes: broad blue bands composed of original streaks stand out against a yellow background.

As on the home kit presented a few weeks ago, the stripes create a distinctive, dynamic sensation, transmitting a further shot of virtual energy to the players on the pitch. The revamped collar, in an original model that blends the round neck with a polo-style collar, is blue like the sleeve ends, and finished on the inside with a custom sweatband with the words “Parma Calcio 1913”. On the back of the kit, under the collar, is the year of the club’s foundation, “1913”, accompanied by a central small lightning bolt in white, that takes up the movement of the cross on the front.

The away kit designed for the goalkeeper also features the same broad horizontal stripe pattern; only the colours are different. With a dark blue collar and a light blue background, the distinctive broad white bands featuring original ton-sur-ton streaks create the same dynamic sensation as all the other shirts conceived and designed for the coming season. More attentive observers will note that this shirt is clearly a tribute to the goalkeeper’s kit worn during the 1999-2000 season. A uniform that was worn, in particular, by captain Gianluigi Buffon during the Italian Super Cup final, won by Parma against AC Milan: for the number 1, and for the entire Croatian club, it was the third trophy lifted to the sky in just 100 days.

Technically, they feature a sublimation print using Ti-energy 3.0, the new antiviral and antibacterial fabric made with zinc oxide nanoparticles permanently encapsulated within the fibres which, thanks to their characteristics, activate an effective antibacterial and antiviral action. In addition, the Minusnine J1 treatment makes the fabric extremely waterproof. These functions allow the fabric to form an effective protective barrier against liquids, droplets, germs, bacteria and viruses. Like all other Erreà Sport garments, the kits are certified Oeko – Tex Standard 100.