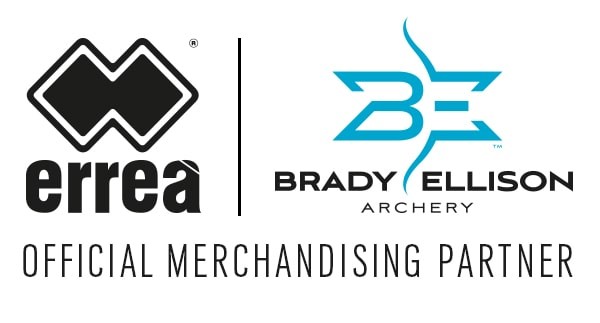 Erreà Sport, leader in the archery sector, and the current world champion and world record holder, have announced the start of a multi-year collaboration that will make it possible for all his admirers to get hold of BE branded garments.

The partnership will see Brady assist Erreà in the design and promotion of the leisurewear range, that will be officially presented in Rome during the Indoor World Series tournament on 13, 14 and 15 December.

The range, that will include some garments from the Stripe iD collection, will be available from selected stores, online via the www.errea.com website, and from the Erreà stand at events such as Nimes Archery (17-19 January 2020) and the Italian indoor championships in Rimini (21-23 February 2020).

“We are proud to partner with a company like Erreà who has top quality products. Expanding our archery family to Europe in hopes of giving fans more options across the world,” stated Brady and Toja Ellison.

“As a brand committed to sport, Erreà likes to explore new challenges and break the barriers of creativity through its innovative approach. Brady is an iconic athlete and a proven leader, and together we hope to have the ability to promote the archery philosophy and inspire the next generation of Olympians,” said Roberto Gandolfi, Vice President of Erreà.

Brady Ellison is an archer from the United States who competes with the Olympic bow representing the USA. He is the current number one in the World Archery ranking, the reigning world champion and holder of several indoor and outdoor records, as well as the winner of two silver medals and a bronze at the Rio and London Olympics.

In archery, Erreà is currently the official sponsor of World Archery and the French, GB, Australian and Serbian national teams and the official technical supplier to dozens of clubs around the world. With the Active Tense range, it is the sponsor of the United States Federation and partners with athletes such as Mauro Nespoli, Marcella Tonioli, Vanessa Landi, Gabriela Bayardo and many more.